How to meet women

Have you ever noticed how some guys are able to approach a complete female stranger and within a few minutes have her laughing and having a great time? Now the weird thing is that some of these guys are fat, poor, bald, and old.

On other end of the spectrum there are guys who do not yet have the ability to approach a complete female stranger and have her laughing within a few minutes (don't worry if you fall into this second category--I know l used to). The funny thing is that many of the guys who fall into this category are rich, young, and handsome. For some of these guys the idea of approach a complete female stranger is scarier than swimming in tank full of sharks. For others, they are able to approach women, yet always seem to reap a negative response from them.

One thing that is obvious is that looks, money, and success do not solely determine how a woman is going to react to a man when he approaches her. I think that the majority of what it comes down to is skilI. This skill is so damn important because women will judge and test how PRIZABLE you are by how you go about meeting them. Thus, knowing how to approach women is a huge part of PRIZABILITY.

When l talk about "meeting women" I am talking about doing cold approaches. This means approaching women who you have never met before and have not been introduced to you through a mutual friend. There are really two parts to cold approaches: initiating and conversational opening.

Initiating is not opening up a conversation with a woman but getting her attention.

Now some guys will initiate contact with a woman by saying something like: "You are so beautifuI. What's your name?"

This is bad and displays lack of PRIZABILITY. Let's look at the reasons "why".

One is that by calling the girl "beautiful" you are assuming the frame that she is the PRIZE (remember, we want to do the opposite of this).

Two is that by asking the girl her name, you are showing interest in her and thereby assuming that she is the PRIZE (general rule: when first meeting a girl it is always best to not ask questions. Just talk and she will start asking questions. Questions assume that she is interested in you and what you have to say. Put in other words, it assumes that you are more PRIZABLE than her. However, once she begins asking you questions it can be powerful to start asking her questions we will talk more about this when we get to the chapter on rapport).

A good initiator DISPLAYS all of the right things and does not give her control of the meta-frame: It does not send out the messages that she is the PRIZE, you want her acceptance, and that you are willing to work really hard to get her in the sack.

Here is one of my favorite initiators, which is very money indeed. "You hurt me" initiator:

When l am at a bar l have been known to stick out my elbow really far. This makes it likely that a girl will mistakenly graze my elbow. When this happens I say in a whiny voice: "Ow, you hurt me". Usually they will start laughing. Once in a while you will get a slow one who will profusely apologize. In this case, I say: "I hope you have a good lawyer because l am suing you". They usually will bust up laughing and say, "stop" while lightly hitting you or pushing you. In this case you should follow up with: "You are quite touchy, I think l am also going to have to sue you for sexual harassment". At this point they will be laughing really hard.

"Did he call yet" initiator:

This always reaps a good laugh and frames her behaviours as being a bit needy. This implicates our meta-frame:

2. That she is trying to get you to like her or trying to win you over--whether it be in the sense of attraction, acceptance or validation.

3. That she wants you so bad that she is trying to make you sleep with her.

Just think, within in a few seconds of talking to a woman, you can already begin to set the meta-frame with her.

Conversational opening means opening up a conversation with a woman (or group of women). I have found that one of the easiest ways to open up conversations with women is to get their opinion on something (now l told you that it is usually bad to ask questions within the first few minutes of meeting a woman. And l still maintain this. But this is the one exception. I say this because this is a fantastic method of opening and initiating conversations with women).

By the way, conversational openers can also be used as initiators.

To really make conversational openers work you need to convey, at first, that all you want is her opinion, and that you have no interest in even being friends with her. So be aware of your body language. If your body language is conveying that you really want to be liked and accepted, women will pick up this. Women are in tune with this stuff.

Okay, onto some great opinion conversational openers to use on women. The cheating roommate opinion:

This conversational opener is great because women, as we know, love gossip and drama. Once you get them started on this, they will not shut up.

I started using this opener a few months ago. This is probably my favorite opener because people always get really excited about it. So, her it is.

Say to woman (or women): "How well do you guys know eighties pop music? (If they look young, ask them how well they know nineties pop music)...good, because my friend just got a pug and a beagle dog...the pug is a boy and the beagle is a girI. She wants to name them after an eighties pop duo...So, I am trying to come up with names? I was thinking Sonny and Cher because Sonny looks like a pug and Share looks like a beagle but they were in the seventies...Or how bout Prince and Carmen EIectra? No, that won't work because Prince looks more like a Chihuahua than a Pug. So, girls, I need some names for the dogs."

I don't know why but this conversational opener is pure gold. I guess part of the reason is that women love both pets and music--go figure.

This exercise is more intended for men who are just starting out. If you do not have difficulty when it comes to approaching women, feel free to skip this homework. 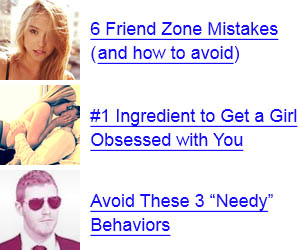 How To Approach Women Anywhere