How to be a Songwriter Review

How to be a Songwriter 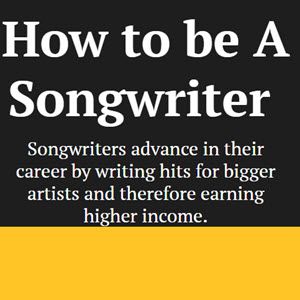 It is a popularly known facts that the singular act of writing or co-writing hit singles for superstar artists can possibly earn you several millions of dollars. More money can be made as songwriters advance in their career by writing great hits for A-list artist. But truth be told, this level of getting “so big” is not a position all songwriters can attain. It is seen that a large percentage of songwriters work part time to support themselves while pursuing their career as they never earn significant income from the songs they have worked tirelessly to compose. The book “How to Be a Songwriter” can take you on a smooth road to stardom. As a songwriter, it is seen that in most cases, a bulk part of your earnings comes from royalties people pay when digital materials of your song are bought and streamed, and when songs are played on radio, performance royalties are generated also.

What the book How to Be a Songwriter entails

Several subject to get you started in becoming a songwriter is covered in this book, like;

Studying this two important personalities, the secret to their amazing success is put together in the how to be a songwriter book.

How to be a songwriter is a book lets you know that in composing a hit song, you are meant to build a good song structure. The hit song is meant to have a coherent song structure. It would do a lot of good to write parts of your song down and then attach musical ideas to it as they come.

Michael Jackson used in the song “Billie Jean” a catchy chorus. Since the chorus is the most memorable melody of a song, he introduces two verses before the chorus, and used repetitive lyrics to state the summary of his action. Such lovely idea is what made the song one of the greatest hit of all time.

The Beatles used in the song “She Loves You” a wonderful intro. Since the intro is an instrumental opening that should introduce the tone and rhythm of a song, a melodic chorus is used to open the song! This is new right?, breaking the typical form. That is why the song made waves around the world.

Pharrell used in the song “Happy” a lovely tune. The pulsating, up-tempo beat has the power to get stuck to your head once you listen, even though the tune was initially intended for a popular kid movie ( Despicable Me 2) it is generally enjoyed either it is being listened to by a parent or a child. The amazing tune is the key to its massive success it recorded.

Lady Gaga used in the song “Bad Romance” a ultra-catchy chorus. It is unique like many great songs of all time as we can make a case for few different part of the song technically being the hook. Between the can’t-get-out-of-your-head ‘Oh oh ohs’ and the thumping drum line this is a tune that as much as the classics from decades ago deserves to be in conversation, it does too.

Queen and David Bowie used in the song “Under Pressure” a great hook. On a lighter mode, the dum-dum-dum-di-di-dum-dum beat which accounts for the 99 percent of the hook of “Under Pressure” was even borrowed by ”Ice Ice Baby” many years later and made Vanilla Ice a star. This beat works fine for decades now and across genres for a reason. It’s spelling out the height of creativity involved in the make-up.

Also, so many other songs that have rocked the music industry in ages uses so many unique ideas to make it awesome and perfect.

Are you the one that

How to be a songwriter is a book is one that has the potential to do help you through all these than any other book out there.

To Cap It Up

How to be a songwriter is a book that would definitely add value to you as it has been tested and trusted by people from around the globe, giving account of the huge success this book has fetched them, the testimonial is on the book’s website for all to see. Don’t waste any time now, get it book! In it we have an entire program with answers dedicated to your mostly asked questions. 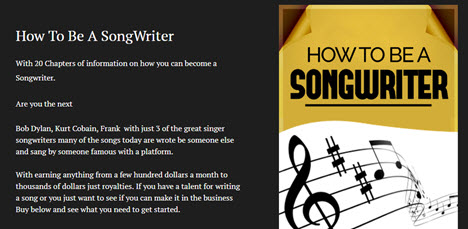