Activate The Self Healing Process Within You 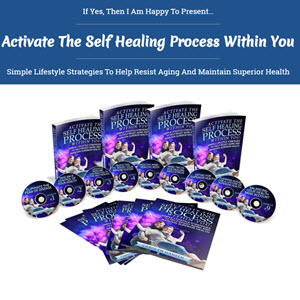 Firstly let me thank you for buying this effect, I'm sure that you'll have as much fun and receive as much entertainment from performing it as I have. It always generates an incredibly strong reaction because of the seemingly impossible nature of the effect, and the obvious truth that you cannot be cheating.

Consequently, before I describe what the effect is or how to perform it, I'd like to stress that although the very idea itself may sound ludicrous, and although you may believe that I have gone totally and utterly mad, it does in fact work!

You must enter into this with an open mind and believe in what I am about to tell you, otherwise you will think that the only thing that is going to be made to de-materialise is your money!

I have performed this many times, and have taught other people how to replicate the phenomena as well, so all that I ask is that you please give this a fair chance by testing it for yourself - it costs nothing and the result will amaze you!

I have to say that I'm not much of a fan of the majority of the New Age type "Sciences," and although I personally don't believe that the scientific explanation proposed to explain the phenomena is definitely correct, there is something at work here and as far as I know, no other explanation has really been proposed.

The phenomena was first theorised, observed, and recorded well over 50 years ago by an Austrian scientist called Wilhelm Reich as part of his general theories and experiments into a form of radiation that he called orgone. He believed that orgone was present everywhere in the universe, and that orgone was in fact the "life force" present in all living things (similar to Chi in Chinese culture).

He believed that orgone had a causal nature, that is its behaviour could be manipulated by observation and by willpower. Although this might sound disingenuous other mainstream scientists, most notably Schrodinger and his famous cat experiment, have proposed a similar causal nature to quantum mechanics - indeed quantum mechanics also predicts a causal effect on sub atomic particles when they are simply observed.

Reich had originally worked with Sigmund Freud, the father of psychology, but his theories and discoveries carried him in a different direction and he concentrated all of his time and efforts into researching his theories regarding orgone radiation. He eventually settled in the USA after fleeing the Nazi regime.

Although he held some rather unorthodox views, and some scientists dismiss his theories out of hand, he is regarded by others as a genius and is held in the same regard, and is often compared to, Nicola Tesla. He discussed some of his theories & experiments with Einstein.

Strangely, the American Government felt it necessary to smash all of his equipment, burn his books, and imprison him for his beliefs (this has had constitutional significance in the USA). He died imprisoned in 1957, but the government still found it necessary to destroy many more of his journals and records 5 years after his death in 1962.

Wilhelm Reich's dying wish was that his remaining papers be sealed and kept secret for 50 years after his death - they will be revealed to the World in 2007.

Since his death there have been suggestions that some of his theories have been shown to be correct, although again, the general scientific community would refute such claims.

The effect is based on experiments demonstrated and documented by Reich in an attempt to prove that his orgone radiation theories were correct.

A Touch of Healing

How to Stop Losing and Leaking Your Vital Life Force Energy, Nicola Tesla - Power for the World for Free, Orgone Energy Healing