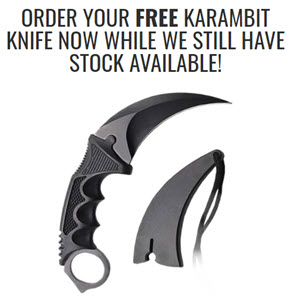 A deck of cards is divided into two halves. From each half a card is selected and remembered. Each spectator who selected a card returns it to the deck and performer shuffles each into its respective half. The two packets are placed together to make the whole deck again. Performer places the deck behind a piece of newspaper and crimps the paper around the cards. A spectator is given a knife and told to stab through the newspaper into the cards. After this has been done, paper is removed. Deck is then opened at place where knife pierced it, and the selected cards are found, one on each side of the knife.

This is an effective version of an old card classic. In the original version the magician guided the knife himself in locating the cards, but in this variation the spectator stabs the knife into the cards himself and yet the cards are located.

2--A table or pocket knife, or dagger.

3--A half sheet of newspaper.

Divide deck of cards into two halves. Place one half on table. With other half in hands, walk up to spectator and ask him to select a card.

"Will you please, sir, select any card?"

"Take the card from the pack, remember it, and if you care to, show it to someone else. Then place it back into the pack."

Open cards into two sections and have spectator place card on top of lower packet B. Then place packet A on packet B, keeping packets separated by little finger of left hand.

Do the SIMPLIFIED PASS, which brings the selected card to the top by shuffling.

Under cover of right hand bend the cards backward. They should retain a slight curve when put down -- not enough to get the attention of the audience. Figure 15.

Lay the cards on table with narrow edge toward audience. Keep long curved side away from spectators so that it will not arouse suspicion. Figure. 16.

Pick up other half of deck.

"From this other half I should like to have another card selected."

Walk over to another spectator, fan pack, and have him remove card.

"Thank you, just any card. Make mental note of it and place it back in the middle again. We will shuffle these cards well also."

When card is returned to second section of deck, as before place little finger of left hand over it. Do the SIMPLIFIED PASS in reverse form so that selected card is on the bottom of this section.

Under cover of right hand bend the cards forward, in the opposite direction to that in which you bent the other half of deck. Figure 17.

Hold cards in right hand, and with left hand pick up the half deck lying on table. Place both packets together, the section held in right hand on top. Figure 18.

Hold both packets in left hand, pressing them together tight with left thumb. If this is not done, the space between the two sections of the deck caused by the opposite curves will be apparent to audience. To the audience it appears that you put the two halves of deck together without in any way keeping track of the selected card. Figure 19.

In spite of the fact that the thumb holds the two sections together, when it is removed the packets spring back to the curves and leave a space between them.

Request a spectator to come forward to assist you. Have him stand at your left and a little in front of you.

"You will help me, I know. I need a good, strong, handsome man with magic power. I believe, sir, that you possess this rare power which I am seeking."

Pick up knife from table.

"This is not a common knife, I assure you. It has strange powers in the hands of some people. Just hold it, sir, in your right hand."

Give knife to gentleman assisting.

"We shall need this piece of newspaper."

Pick up paper from table with left hand.

"Not so much for the news, but for wrapping or dress purposes, or for hiding the cards -- sort of hide-and-go-seek -- so 'twere."

Hold cards in right hand. Place sheet of paper in front of right hand, first showing paper both sides to prove absence of concealed articles or any trickery. Figure 20.

Push paper down around cards enough to show audience that paper has been placed over cards. Take hold of deck with paper over it in left hand.

Shift position of right hand under cover of paper so that you can hold pack by top and bottom. Figure 21.

Still holding newspaper in left hand, draw deck back from paper a little so as to give you free play. The newspaper tends to flatten out where cards were.

Push down on cards with right thumb and up with fingers. This pressure causes cards to bridge apart with wide space between two sections. Figure 22.

Release pressure and cards come almost together again. This is done to be sure that all is working as it should for final climax. Place cards back against paper again and hold with left hand so that form of cards shows plainly.

"Yes, that is a magic knife -- a magic knife that has an X-Ray vision that penetrates any object. For instance, it looks right through this paper. Hold it up, sir, and point the blade this way. See, it looks right through this paper and, would you believe it, it has its eye on the two cards that were selected. Even though one card has been shuffled into one half of the deck and the other into the other half, yet it sees them. If you will wave the knife in a circle, it will cause the two cards to become so attracted to each other that they will come together. No matter where they are, they will fly into each other's arms. Are you ready? Wave!"

Gentleman waves knife in circle. Without disturbing position of left hand on cards, look behind newspaper for a moment at cards.

"Yes, sir. There they are together. You must admit that there is magic in that knife. Just think, one wave and the two cards actually come together. But that isn't all. I'll show you something even more wonderful."

This has a comedy touch as the audience has not seen the two cards together and does not believe they are just because you looked. To them it isn't a trick. And when you consider it as such and say you will do another, they smile and wonder whether the next will be as ridiculous.

"Step up a little closer and place the point of the knife against the cards, or rather against the paper covering the cards."

"Fine. Now, draw the knife back a foot or so, and then thrust it through the paper and into the cards."

Spectator runs knife into pack until it sticks out at other end of cards. While he is doing this, you press on cards as explained before so that knife will go into space prepared for it. Figure 24.

"Hold on to knife tight, and do not let go while I tear off the paper."

Remove paper. Keep cards held tight together. Hold deck so that audience can see the knife inserted in the deck. Figure 25.

Hold lower packet of cards beneath knife blade with left hand and upper packet with right hand. Turn cards so that backs are upward.

"The ACE OF HEARTS. Was that your card? Correct."

We are merely assuming here that the Ace of Hearts was one of the selected cards. Whatever the card is, call it out distinctly and with emphasis. This is a CLIMAX and you must drive home to your audience your remarkable POWER.

Remove lower section from under knife. Hold it up in left hand with faces of cards toward audience. With left thumb push off top card far enough so that audience can see it plainly. Figure 27.

"And on the other side of the knife -- the TEN OF CLUBS, the other selected card. Right!"

Knife Throwing Techniques of the Ninja

Knife Throwing Techniques of the Ninja. span stylecolor: 000000Do you want to learn the art of throwing knives? Ever wondered how it is done to perfection every time? Well here is your chance. This book contains well over 50 pages of detailed information and illustrations all about the art of knife throwing. This intriguing book focuses on the ninja's techniques and training. This is a must for all martial artists and anyone wanting to learn the knife throwing techniques of the ninja.span