When Mike asked me to come back for one last review in these pages, at first I didn't want to do it. And then, after I thought about it for a second, I still didn't want to do it. And then when he told me it was to review his latest book Workers #5, I really didn't want to do it. After a year of co-writing this column I decided that the only really good thing about being a reviewer is that we get to keep the stuff we critique. Because Mike is my buddy I knew I'd be able to talk him out of a free copy of his book regardless of whether I did the review or not. What did I have to gain? And then, what if the book was crap? After all, that's one of the reasons I quit this job - I hated saying negative stuff about people's work.

Luckily, it's not crap. (You have no idea how tempting it is to end the review right now with that being the extent of my review, "It's not crap." But I'll proceed...)

As I say, luckily, it's not crap. Lucky for me, because I really didn't want to have to say I thought Mike's latest book was crap; and lucky for you, because the last thing magic needs is another crappy book. (I'm trying to see if I can acquire the record for the number of times the word "crap" is used in this magazine.) (Oh, and the record for the most parenthetical comments.)

I must say that as I began reading this book I wasn't so sure I would be able to say that it wasn't crap. For, while the first couple of tricks described are actually very good, I didn't think they quite came up to the high standard that Mike has set for himself in the first four volumes of his Workers series. I found myself thinking, "Uh-oh, Mike is out of the top-notch, grade-A, tried-and-true material." But I was wrong. As the book progresses, the tricks get stronger and stronger, and by the end I realized that if I learned every trick in this manuscript I'd be one of the top close-up magicians in the world. And then I realized that Mike Close does know all these tricks. Hey! Guess what that means!

If you are unfamiliar with this series of books you should remedy that situation as soon as you can. Along with the recent Tommy Wonder masterpieces, this five volume series is one of your only chances to read about magic tricks really used under fire by top professional magicians. Mike's Workers series are books designed to teach you real, performable, used-every-day kind of magic tricks. They are not books filled with tricks which are novel for novelty's sake. They don't have (with one small exception) tricks which are sketchily described. You can tell that Mike has performed all of the tricks he writes about. You can tell this because, in addition to the methods and secrets of the tricks, he gives the timing and the reasoning and the audience management which he has carefully thought out and worked on over the course of actually doing these things for real honest to gosh people. That's why he calls these books "Workers.'

It's obvious from his descriptions that Mike has spent a good portion of his life working on these tricks. All that work done by Mike means that there is less work for you to do. Although, to do these tricks justice you're going to have to become something of a worker yourself. Almost none of these tricks are technically easy. But almost none of them are anything short of miraculously well worked out, either.

This volume has about twenty tricks and about ten essays on various magic related topics. There are ten pages devoted to teaching Mike's handling of a few sleights (the bottom deal, culling, the faro shuffle and a couple of others). The tricks are mostly cards, but there is a coin routine, a great routine for the Gaetan Bloom version of "Ring Flight," and presentations for a few of other dealer items (including Ton Onosaka's "Lucky Lady," "The Tamariz Rabbits," and even the old "Chinese" Prayer Vase.") The essays range from thought provoking to (I'm not kidding) tear jerking. The last quarter of the book is devoted to Mike's tricks and thoughts on using a memorized deck. If you are at all interested in this type of work, this may be just the push you need to convince you to get to work on learning some type of system. I've seen some of these tricks in action and they are devastating.

There you have it. My review of Mike's book. Of course I'd be remiss if I didn't mention that a couple of the essays seemed to have minor cut and paste problems, and there are a few punctuation mistakes here and there. These don't particularly detract from the book, but I felt I should reference them because Mike is so fond of pointing those things out in the works of other people. The majority of this material is close-up material and much of it is, as I've mentioned, technically demanding. The production value of the physical book itself (166 8 ^ by 11 inches computer typeset pages, plastic comb bound) is adequate. The drawings are good.

This book, like the four before it, are highly recommended. The End. And now I really quit. I swear.

[Mac King is a former product reviewer for this magazine. He is also one of the best performers on the planet. If he is ever in your area, be sure to catch his act. It's not crap. M.C.] 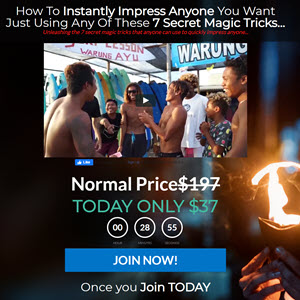