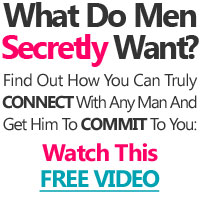 Some men need to be reassured more than once. Some of us are shy no matter how much bravado we exude. A few of us have been hurt in the past and aren't certain that someone who merely smiled is actually interested. Then there are those of us who aren't not that socially adept, thus we don't get the first message you send.

Don't give up if your first smile doesn't have the impact you want. Wait a few minutes, then give him a louder, stronger signal.

Without looking at him, gradually shift your posture to erect then turn so your body is facing him. Pull your shoulders back slightly to make your breasts more prominent. Now, look directly at him. Continue to stare until he looks at you. When he does, hold his eyes for longer than socially appropriate, then smile briefly and look down in a slightly submissive way to break off eye contact. WHEN HE COMES OVER

After the awkward, exciting first few moments have passed, if he does not offer his name and shake hands, offer your hand and your name. Use the immense power of touch to communicate whatever you want him to know about you. At the same time use your intuition to learn as much about him as you can during those precious few seconds. KEEP HIM INTERESTED

Most men love to talk about themselves. After the standard obligatory questions and statements, always ask him something about himself that gets him talking. Typical subjects men can ramble on forever about and enjoy themselves, thus you:

At the beginning of his monologue, encourage him by appearing to listen attentively as follows: lean forward, nod, give him a few 'uh huh's," raise your eyebrows, tilt your head. Keep your hands off your face and mouth. Don't cross your arms in front of your chest. Don't steeple.

After he gets into to it, use your intuition to de termine if you like him or not. Send him the signals that match your decision. ESSENCE OF ATTRACTING MEN

As a woman you have the power to send discreet and distinct, yet potent, signals without words, thus without risk. Once again, use what you have.

Beyond smiling at him from across the room, the most powerful thing you can do is touch him. After shaking his hand, touch him. It makes no difference when, how, where or why. Two or three times during the first conversation is an excellent start.

Brush his hand lightly when handing him something. Admire and touch any of his accessories or attire. "Accidentally" bump his leg with your knee as you change positions. Any semi-plausible reason or accident or excuse is fine.

Much of the next chapter, Courtship Tactics For Men, applies to women as well. The parts that don't are obvious.

How To Become The Girl Men Adore

If you asked most women today what type of girl men adore and couldn't live without they would answer the she would have to be an Angelina Jolie lookalike or at the very least be blond, blue-eyed and have killer legs. While this type of woman would definitely attract a lot of attention, she actually the type of woman that men adore.